Happy International Education Week! Did you know it was that time of year again or that this is the 15th annual installment? In a recent press statement Secretary of State, John Kerry notes “During this week, literally thousands of events will be held around the world to highlight the benefits of global learning and student exchanges. To understand why this is important, we have only to consider the consequences when people lack what international education provides – namely an objective understanding of 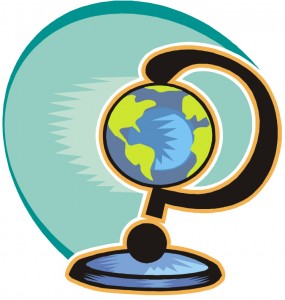 the world that exists outside the narrow boundaries of our own communities and lives.”

Sounds great!  In fact one of these  great events is the Global Education Conference, This is a must to explore, collaborate, and watch archived sessions. In fact Tuesday night at 7:00pm EST I will be part of a panel, Session Title: Lesson For All: the right of education and the barriers worldwide SESSION LINK – https://sas.elluminate.com/d.jnlp?sid=2008350&password=GEC15Part26

However, in a potentially confusing move, President Obama released this press statement the same day as Kerry’s proclaiming Nov 16-22, the same as International Week, as “American Education Week.” Huh?!  The President declared:

“In a complex world, we must meet new and profound challenges.  As a Nation, we must prepare the next generation to face these issues and the problems of their own time.  An education equips the leaders of tomorrow with the knowledge and vision they need to discover the solutions of the future and build a better society for their children and grandchildren. This week, we honor the 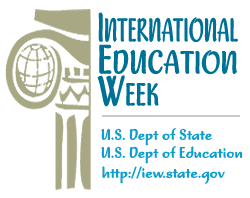 teachers, mentors, and professionals who guide our kids as they explore the world.”

Does this set of educational dichotomies bring ambiguity and confusion – national/international,  global/local, narrow boundaries/explore the world. Can this be sorted out?  Ok, challenge accepted, I’ll give it a try and look forward to your insights. As my entry point let’s take a travel back in time so we can put our present and future work around global education in proper perspective.

It has been nearly a year since Johns Hopkins professor Jakub Grygiel authored an article in the Washington Post  titled “There’s no Such Thing As a Global Citizen” .   This was certainly an interesting article to engage with and have shared it with other educators, most recently with IREX’s Teachers For Global Classrooms program, for their insights.  Grygiel, an international politics scholar is missing the mark when he engages in a concept outside of his field. Let’s look at four ways his piece doesn’t jive with contemporary efforts in global education.

It is highly likely that the school, university, or organization you work for has some explicit or implied conceptualization of global citizenship in a policy, vision, mission statement, or practice. For example, Fairfax County Public Schools has initiated a

new vision for students, Portrait of a Graduate, which includes the theme “Ethical and Global Citizen.” Please note the 5th descriptor (bold/underlined) and its overt connection to the nation.  This is not surprising. What Grygiel misses,  due to the limits of his field, is that when schools address global citizenship, they are talking about fostering a world view  and habits-of-mind which compliment globalization. This type of education is not about addressing a legal distinction or an implied threat to nationalism.

Well, I can’t claim to know why Grygiel selected this organization as the definitive explanation of global citizenship.  I would have gone to any of the statements and models by these organizations who, no offense Oxfam, do it better. Explore for yourself – Asia Society,  World Savvy, World Affairs Council, Kosmos, IREX, IIE,  US Department of Education,  the list can go on.  But to sum up in one quote from professor John Willinsky, “Education remains a voyage of discovery, a journey in search of a larger world.” These other frameworks offer more insight into global citizenship.

The 1965  work, Is Paris Burning? eloquently narrates the the liberation of Paris in the late Summer of 1944. The title of the book is the Fuhrer’s final communique to the commander he had ordered to turn Paris  “into a field of ruins”, General Dietrich von Choltitz.   Von Choltitz’s refusal to follow Hitler’s order is evidence of a sensible moral compass not defined by national identity. His, dare I say, act of global citizenship saved the city of light. According to French General Koenig, von Choltitz “had more friends in France than he has in Germany.”

Another way to look at this is the through Gordon Brown’s TED video which addresses these questions: Can the interests of an individual nation be reconciled with humanity’s greater good? Can a patriotic, nationally elected politician really give people in other countries equal consideration?

Grygiel’s closing sentiment is, at best, a ridiculous scare tactic, and at its worse an insult to any benevolence performed by a human in one location to that in another in the name of compassion and solidarity.  It is important to recall and celebrate the realities (and subsequent possibilities) performed by individuals who have internalized global citizenship.  What do we make of Eleanor Roosevelt’s supposed impossible task of unifying the United Nations around Universal Human rights?

Professor William Gaudelli’s 2009 article Heuristics of Global Citizenship Discourses towards Curriculum Enhancement, researches five different “types” of global citizenship ideologies: neoliberal, nationalist, Marxist, world justice/governance, and cosmopolitan. While these are not intended to be exhaustive of those ideas in play, I select them for a few reasons. First, they represent a fairly wide swath of global discourse from various points on the political and epistemological landscape. Second, while there are clearly points of agreement among them, there are also tensions, allowing for a more robust conversation.  And third, each has a counterpart in curriculum, and manifests in schools in a discernible manner that sets it apart from others.”  Take a look at his visual.  More importantly, note  Grygiel’s limited denunciation of global citizenship as a Marxist legacy.. 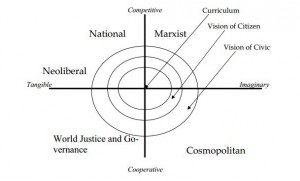 Global Citizenship: The Legacy of Cosmopolitanism

What is cosmopolitanism? In the 4th century BCE, the classical Greek Cynic, and contemporary  of Plato, Diogenes, claimed “I am a citizen of the world” thus rooting the cosmopolitan ethic in western cosmology. This legacy can be traced through a variety of historical sign posts, of which some are identified here.

In 1637 Rene Descartes, in his famous and widely influential work Discourse on Method wrote  “It is useful to something of the manners of different nations, that we may be enabled to form a more correct judgement regarding our own, and be prevented from thinking that everything contrary to our customs is ridiculous and irrational  – a conclusion usually come to by those whose experience has been limited to their own country.”

Immanuel Kant’s 18th cosmopolitan philosophy focuses on the roll of law, citizenship, nations, and the economy. He predicted people would be part of a global civil order governed by lawful associations.  However, Kant argued that “cosmopolitan citizens still needed their individual republics to be citizens at all.”  He made sure that he used the phrase “world federation” not “world government.”  Typically, people think of the League of Nations or the United Nations.  Another Kantian example is the The Maastricht Treaty which integrated European nations around one currency.

Fast forward to the 20th century to Graham Greene’s musing in the novel Our Man in Havana “There are many countries in our blood, aren’t there, but only one person. Would the world be in the mess it is if we were loyal to love and not to countries?”  This is a fantastic sentiment that is often drowned out by the drums of war.

To close this post, I end at a monument about 2 miles from where I write this, the Martin Luther King, Jr. Memorial.  His quote often surprises people I share it with because of it cosmopolitan view.

“If we are to have peace on earth, our loyalties must become ecumenical rather than sectional. Our loyalties must transcend our race, our tribe, our class, and our nation; and this means we must develop a world perspective.” Christmas sermon, Atlanta, Georgia, 1967.

Ok, one more video…its worth it!